With two record releases and extensive touring, mainly in Norway, Kjemilie has made its mark on what folk-jazz can be. Their first release 'Hverdagene' was described by the Norwegian jazz magazine, Jazznytt, as "one of the strongest releases of the year".

Kjemilie has developed their own expression in the jazz and folk tradition, but is forever looking to turn around the rocks in the music for new directions. With lyrics in the Norwegian dialect "Trøndersk", strong melodies and playful improvisation, Kjemilie creates a unique musical and textual space. Kjemilie gives life to the simple everyday-feeling in their music, and invites vulnerability into the interaction in music between the naked vocal and piano. 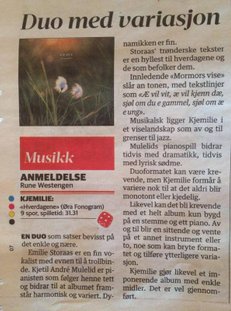