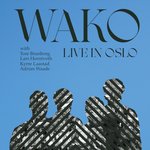 "This is how jazz is kept alive” - Aftenposten

Wako are releasing their fifth record, a live album that further establishes them as one of Norway's leading jazz groups, and recalls their active touring nature. The album displays the band's unique musical palette, which is augmented by four phenomenal guests. The album also features three songs of pure quartet joy, from Oslo Jazz Festival 2020. This is an album that Øra believes puts Norwegian music in a particularly positive light beyond Norway's borders.

To emulate the grandiose and eclectic character of Wako’s eponymous fourth album, the release concert at National Jazzscene in Oslo - Norway's premier jazz venue - was played with four guest musicians on stage. Tore Brunborg, Kyrre Laastad, Adrian Løseth Waade and Lars Horntveth - some of the finest jazz musicians there are in Norway. On November 6th 2020, the day of the concert, a new lockdown was announced in Oslo, and the concert with Wako and friends was to be the last with an audience in Oslo for almost half a year. Wako's "Live in Oslo" is the story of an evening where musicians played and the audience listened, because they didn’t know when they would have the opportunity again.

With four studio records and hundreds of live performances under their belt, Wako plays with an authority and personality that places them at the forefront of Nordic jazz. Wako is one of the most dynamic and innovative groups on today's jazz scene, and has built a solid fan base and garnered recognition from critics near and far. According to Mark Sullivan (All About Jazz - US), Wako is "a Norwegian jazz collective with a real collective sound", and the previous album "Wako" (Ear phonogram, 2020) was put on the top list of Jazzwise (UK) both in March and April 2020. Wako has taken their ever-evolving musicality and creativity with them around Europe, and done renditions of their music live both as a quartet, with the Oslo String ensemble, and with trumpet virtuoso Arve Henriksen, among others. The scope of the music is always carefully adjusted to the audience, environment and musical material, which means that the concerts are not only superlative, but also unique experiences. In short, Wako is one of the most impressive young live groups today. Individually, the musicians can also be seen in projects such as Norwegian grammy winner Hegge, norwegian grammy nominees Megalodon Collective, Espen Berg trio, Kjetil Mulelid Trio and Trondheim Jazz Orchestra.

“This is how jazz is kept alive” - Aftenposten

“The stage is sparkling untill the end” - Dagsavsien

"Wako is a quartet that you would very much like to see play on the stages of the Low Countries much more often, because the development of the musicians is so terribly interesting for the band. And the impact of their music is so great on stage. Free in conception and even more free in execution. Listening to their albums I was already a big fan of the band with this live registration even more." Written in music