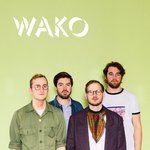 "«Wako» is an album that summarizes a significant period of this busy, innovative band, presenting itself as a versatile and highly diverse outfit that still wishes to expand its aesthetic." - Eyal Hareuveni, SaltPeanuts (IL)

“If you like something diverse and intriguing with a vivacious blend of cross-pollinated jazz seeds that have grown into something fresh, wild and adventurous, this is an album well worth checking out.” - UKVIBE (UK)

In this, their follow-up to "Urolige sinn", Wako have adopted new creative processes, approaches, and methods, as well as an exceptional roster of guest musicians. "Wako" is an album of diversity, a jazz and improvisational banquet, a cornucopia of compositional exploration, and – above all – very aptly named, as it is resoundingly "Wako".

Once again, Martin Myhre Olsen and Kjetil André Mulelid's compositions interweave order and chaos, dissonance and harmony, light and shade, and all manner of musical grit and gusto in a unique fashion. Moments of pensive serenity collapse into ecstatic frenzies. Other moments hint at rock, perhaps even pop music, while others are saturated in colorful abstract expressionism. With such an utter disregard for purism, and a will to venture deep into the sonic unknown, Wako creates a unique musical dialect, if not a completely new language.

“A definitive statement for Norwegian Jazz” - All About Jazz (US)

"From the rippling, strings-enhanced and chamber-like to abstracted boogie grooves and rocking rumbustious fun" - JazzJournal (UK)

“Wako's fourth album might be its least cohesive to date, yet here's that rare instance where such a lack is actually a positive thing” - Textura (CA)